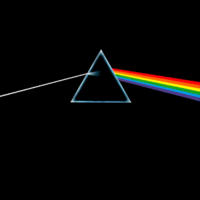 Read about it here:
http://en.wikipedia.org/wiki/The_Dark_Side_of_the_Moon
This album a sonic masterpiece, and has the track record to prove it! It remained on the Billboard charts for 741 weeks, from 1973 to 1988, a record that still stands today.
Following their growing success and the release of “Meddle,” Pink Floyd started trying out songs that would be recorded for this album while on tour, playing live what would end up as the album in its entirety long before it was recorded. When they returned to the studio, they had a clear cut vision of what they were going to record, so their focus turned to how it would be recorded. The resulting experimentations in the studio are what led to such an amazing album. Multi-tracking, tape loops, synthesizers, and the genius of Alan Parsons all played parts in weaving their sonic tapestry.
But there is so much more going on than just studio wizardry and experimentation. Roger Waters’ lyrics were more direct than ever before. David Gilmour’s guitar playing was focused and simple; in fact, most of the instrumentation in general is very simple. The idea was to write an album about stuff that makes people mad, and to develop those ideas into one comprehensive piece. The resulting album is just that- one long playing song broken into 10 parts. Drop the needle on “Speak To Me” and the sounds do not stop until the closing heartbeats at the end of “Eclipse.”
If you do not already own a copy of this album, you may be the last person on the planet without it. Highly recommended.
Mike B.
www.dustyfingertips.com